How Does Your Business Benefit From Using a Smaller Marketing Firm? 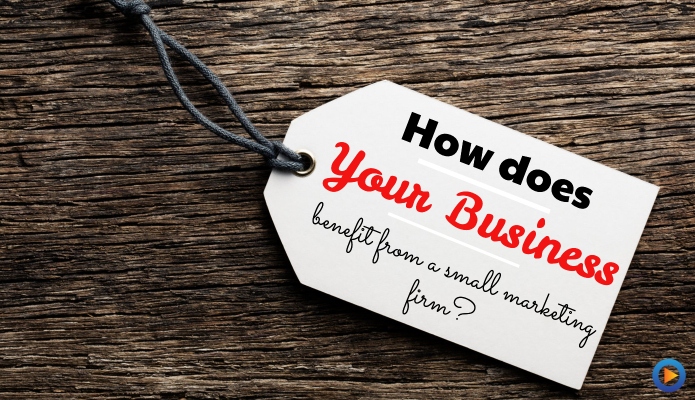 Bigger is better, or so the old saying goes. Why get a small plate of finger food when you could have an entire buffet of options? Why drive a small, efficient vehicle when you could have one that’s got plenty of headroom, plenty of storage space in the trunk, and some blasting power under the hood? And who among us would rather live in a small home when we could instead take up residence in a sprawling manor house complete with all the bells and whistles?

When it comes to your marketing budget, though, it’s important to remember that just because you’re spending a lot of money on something, that doesn’t mean it’s a smart decision for your marketing campaign.

A big-name marketing firm sells itself on the clients it’s handled, and typically on the skill and records of its superstar designers as well as the partners who head up the firm. However, this is a lot like a college campus selling itself to students based on having one or two important, influential faculty members with big achievements in their fields.

It’s certainly a selling point, but those aren’t the teachers a student is going to learn from, personally, from day one. In much the same way, your account probably isn’t going to be handled by the partners and stand-outs at a big marketing firm. Unless you are an extremely valuable client (the sort that the partners would put on their VIP list), your account is going to be handled by someone on staff.

Not one of the flashy names the company brings out to justify its high fees, or someone who engineered that brilliant marketing campaign for a huge corporation; just someone on staff.

To be clear, your account will probably be handled by someone who’s perfectly competent. They’ll have the necessary experience, they’ll do all the legwork you require, and they may even come up with some solid directions for your campaign to go in.

But you’re still paying the same fees as the people whose accounts are personally being handled by the firm’s partners and rock star designers; you just aren’t getting access to the same people they are.

So why wouldn’t you take your money somewhere that it can get you more for less?

The Advantages of a Smaller Marketing Firm

It’s important to state up-front that a smaller marketing firm does not necessarily mean one that is less qualified.

They may have fewer people, and smaller operating budgets than their larger competitors, but they can deliver many of the same services that those other firms can.

More importantly, they can deliver those same services for much smaller fees.

The cost isn’t the only benefit of going with a smaller marketing firm over a large one, though (even though it is one of the most immediate ones).

There’s also the fact that with a smaller firm, you don’t get lost in the shuffle of clients. These firms tend to have smaller client lists, so you won’t get forgotten or overlooked while a dozen different teams all scramble to make their own deadlines.

You can just call the firm up, and talk to the people working on your campaign whenever you need to get an update from them.

Even better, in a smaller marketing firm, there’s a good chance that the partners running things will be the ones working on your particular campaign.

And even if they aren’t personally putting together every aspect of your marketing campaign, it’s likely they’ll be aware of the progress on it, and they’ll be able to brief you on where they are in the process.

There are other advantages to smaller marketing firms, too. For example, smaller firms tend to have less in the way of red tape, and a, “this is how we do things here, take it or leave it,” attitude that a lot of bigger firms can have as a result of developing a rigidly structured hierarchy.

Smaller firms tend to be more flexible, as well, and to give you more time as an individual client, according to Chron.

Just as important, though, is the fact that a smaller agency may be able to give you a quicker turnaround on your project.

The sheer size of a larger firm can work against it, with all its different layers of hierarchy, and as Idea points out a smaller firm has more freedom to make fast decisions and quick changes without tacking several zeroes onto the end of your fee.

When you hire a firm to handle your marketing, what you’re looking for is some ROI; return on investment.

Marketing is like growing a garden. Everything you plant today needs to yield a crop of sales in order to make the initial investment worth it.

You can get good results with either a big marketing agency or a small marketing agency. However, when it comes to where you’ll get the best results, you should take a moment to ask what the break down of the hefty retainer you’d need to cut to a bigger agency to get the same service a smaller competitor would give you, without all the red tape, missed connections, and other issues that a larger firm’s sheer size can cause you if you aren’t already an established, valuable client on their roster.

For more information on how a small marketing agency can help you find your unique selling point and create a successful marketing campaign, we at DigiVid360 are here to help. All you have to do is contact us today, and we’ll be happy to answer any questions you might have about why reaching out to a smaller, more intimate company can get you the results you and your business need.